The Netjeru. Deities of Ancient Egypt–or as it was known by the people of the time, Kemet (from whence the modern religious term Kemeticism is derived). This pantheon was numerous and rather fluid, with multiple myths depicting the same event and different religious cults coming to power or being brought into Egypt from foreign cultures.

Today, I’d like to share one of the many deities whose cult arose from the long-lived Ancient Egyptian culture: a protective spirit whose worship enjoyed its rise in the Late Period (usually designated as being from the 600s or 500s BC to the early 330s BC). He would continue to be a popular god into the Ptolemaic period (Greek rule over Egypt) and even the Roman period (Roman rule over Egypt). Throughout these times and cultural shifts, he was understood as a particularly accessible god, venerated by the common people and featured on amulets.

Meet Tutu. (Known to the Greeks as Tithoes.) 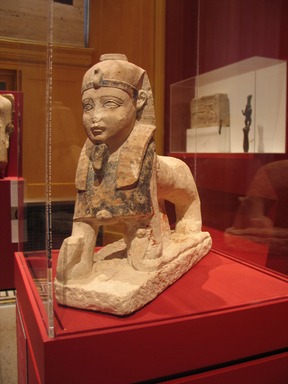 Tutu is most often depicted as an Egyptian sphinx–he has a human head wearing a nemes, a leonine body, and a snake as a tail. He is often depicting trodding down dangerous animals, such as the snakes depicted in the above statue or the scorpions in the stela below, or walking over arrows, depicting dangers such as the Seven Arrows of Sekhmet that cause illness. As “He Who Keeps Enemies at a Distance”, Tutu is believed to hold sway over malevolent spirits and has the ability to protect his devotees from danger. A mighty son of the goddess Nit (spelled Neith by the Greeks), he is also especially petitioned to protect a person while they sleep, fending off nightmares.

Certain of Tutu’s epithets, such as “Who Comes to the One Calling Him”, showcase his perceived accessibility by the Ancient Egyptian people; this availability has often been interpreted as the reason for the unusual choice in many ancient reliefs to show him with his face frontwards, fully looking towards the viewer. 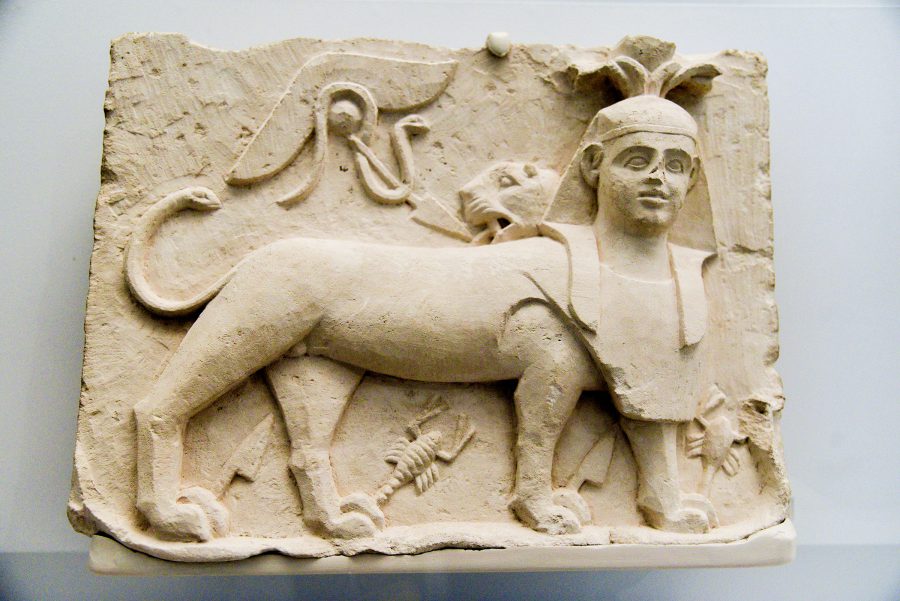 So what does all this mean for the modern Kemetic devotee? In my religious practice, Tutu currently dwells on my Kemetic altar alongside my other Netjeru in the form of a sphinx statue, which I’ve adorned with a necklace I made of glass, carnelian, and lapis lazuli beads. Personally, I have found him to not only be as approachable as his reputation suggests, but also to be particularly calm and collected in his demeanor, to a reassuring effect. He always seems to know when there’s a problem, before you tell him anything, and is ready to listen and offer advice or assistance.

Tutu can still be invoked as a powerful personal protector. Petition him if you suffer from nightmares; keep a small altar to him in your bedroom, and offer him cool water before going to sleep. Buy a sphinx charm and cense it with frankincense, then wear it as part of your daily jewelry for protection during the day. Especially during the coronavirus pandemic, Tutu can be a wonderful addition to a personal spiritual practice, as he has the power to keep spirits of illness at bay.

My Protection Prayer to Tutu:
“Fierce Tutu, Great of Strength, He Who Keeps Enemies at a Distance, I offer You henu as I ask Your protection. Son of Nit, guard me from any malevolent manifestations, be they netjeru or netjeri. Master of the Demons of Sekhmet and the Wandering Demons of Bast, protector of the people, in You I trust, and to You I give thanks. As it was in Your temple in ancient Kellis, so may it be now as I honor You here, as You are victorious in all places You go and all evil flees before You. Where I walk, You walk with me, and I am protected. Dua Tutu! Nekhtet!”

*henu: ritual gestures used in Kemeticism to honor the Netjeru; the simple henu to offer praise is done with arms extended forwards, then bent upwards at a 90 degree angle at the elbow, with hands open and palms facing forwards.
*netjeru (malevolent manifestations): illness-causing spirits, such as the Arrows of Sekhmet, can be interpreted as a manifestation of the goddess herself or her messengers; they are included in the dangerous energies that Tutu protects from.
*netjeri (malevolent): non-divine spirits, against whom Tutu guards.
*Kellis: the ancient town with the only known temple to which its main dedication and function was Tutu’s worship.
*“Dua Tutu! Nekhtet!”: a modern rendering of Ancient Egyptian words that may be generally understood as meaning “Praise Tutu! Victory!”

Having woken up to a beautiful snow day this morning, I thought today might be a nice opportunity to discuss one of my favorite weather divinities: a dragon who brings snow and rain, Kuraokami.

Within the Japanese Shinto religion, you will find many spirits or kami. While the veneration of major kami like Amaterasu-Omikami has become fairly well-known, with proper Shinto lineages even becoming available in other countries (such as the Tsubaki Grand Shrine of America), still many more kami remain largely unknown outside of Japan.

According to the Kojiki, when the kami of fire Kagutsuchi-no-Kami was born, he burned his mother Izanami-no-Mikoto and caused her death. Grief-stricken and infuriated, his father Izanagi-no-Mikoto brings his sword down upon the young fire kami, with several more kami then being born from Kagutsuchi-no-Kami’s blood. It is from the blood that collected on the sword that Kuraokami was born. The Nihongi (or Nihon Shoki) records a generally similar account of Kuraokami’s birth, with the main difference being that Kagutsuchi-no-Kami’s body is cut into pieces, with each piece becoming a new kami. And thus, the dragon god of the valleys’ birth provides his only major myth. In modern practice, there are several official shrines in Japan where Kuraokami is venerated, some of which he shares with other weather kami.

At this point, I’m going to focus on the experience of working with this kami as an American who was completely new to Shinto practices, far removed from the Japanese culture of origin. First, I have set up my altar to Kuraokami utilizing the traditional shrine articles, which is essentially a fixed set of small dishes that each have an assigned purpose; these articles are used for the kami’s offerings. My altar also utilizes other traditional symbols, such as the shrine mirror and a red torii (sacred gate). I have white candles flanking the altar, and a holder for Japanese stick incense (I favor the Morning Star brand’s sandalwood sticks). Now, in a “true” Shinto home altar, these items would all be sitting in front of a kamidana–a small wooden altar box housing the kami’s ofuda. The ofuda is a talisman (usually paper) that one would acquire at a Shinto shrine, and would be inscribed with the venerated kami’s name; it is customarily replaced annually. However, as an American without ready annual access to one of Kuraokami’s shrines, I must admit that my home altar to him lacks an ofuda; instead, I have placed a statue of a traditional Japanese dragon in its place to signify the kami’s presence, which Kuraokami has been understanding and accepting of in my experience with him.

As far as my personal experience in serving Kuraokami, I’ve found him to be a particularly interactive and responsive spirit; in addition to having answered petitions for snow (or to delay it) with considerable reliability, he’s also granted me protection. Aside from making the traditional offerings (which includes rice and salt) using the altar articles mentioned earlier, I will also occasionally use separate dishes to offer other foods, especially when putting forth or repaying requests; as an added note, after the offering is made, the food may be eaten. When approaching this kami, I would certainly recommend making your respect for him clear, as he is strong and can be rather proud. Also, when approaching any kami, an understanding of Shinto purity standards and practices is absolutely necessary.

Here’s an example of a general prayer I’ll use for a common day’s practice, composed with inspiration from translations of prayers used at the Tsubaki Grand Shrine previously mentioned:
“Humbly, I approach the Kami in prayer. In the Expanse of High Heaven dwell the exalted Kami. Heavenly Kami, Earthly Kami, all the many myriad of Kami, I offer my respect and gratitude, and ask that You unite and hear my prayer.
Kuraokami, who dwells in the valleys, divine bestower of snow and rain, born of the bloody union of Izanagi-no-Okami’s sword and Kagutsuchi-no-Kami’s body, I offer my reverence and gratitude, and humbly beseech You to cleanse my being of all impurities.
Kuraokami, all Heavenly and Earthly Kami, all the many myriad of Kami, I pray that You bless me with clarity and protection. Guide and teach me.
Sincerely, I speak these words.“