Recently a friend of mine, a devotee of Lilith and Dionysus, was inspired by a Hekatean adaptation of the Year Wheel to adapt the Year Wheel to their own worship and devotion practice. The idea behind this is that the Year Wheel most commonly accepted in pagan circles broadly is heavily based on Celtic paganism—in many ways it is applicable all over the world and in a wide variety of pantheons, as every part of the world experiences the changing of the seasons. The year, after all, keeps on turning no matter where you’re standing and no matter what gods you’re dealing with.

Cultural significance and nuance exists, however, and so the holidays as they are represented in the Year Wheel may not translate perfectly to different paths, traditions, and pantheons. The changing of the seasons may mean different things depending on your bioregional context—Beltane likely won’t look the same if you’re living in a desert vs. if you’re living in a coastal fishing town, for example. That doesn’t even take into consideration the fact that the northern and southern hemispheres don’t experience the same seasonal changes at the same time—Beltane may happen in May in the northern hemisphere, but May is not the time for Beltane in the southern hemisphere.

My friend wrote a rough outline of what the holidays may represent or symbolize through the lens of someone who is working with Lilith and Dionysus rather than working in a Celtic framework. We’re coming up on Litha, for which their outline looks like this:

What, exactly, does this have to do with Rökkatru? I did promise that this blog would be exploring Rökkatru, did I not? Why am I talking about my friend’s Lilith and Dionysus based revision of the Celtic Year Wheel?

Besides the fact that I think it’s a neat idea, I think it could serve as an example for Rökkatru to do the same: why not adapt these commonly held pagan holidays to more accurately reflect the Rökkatru perspective and worldview? Why not reinterpret the holidays to make room for specifically honoring the Rökkr on these key dates?

Litha is traditionally a holiday which focuses on the sun, often in the form of the Wiccan god or other sun deities. The holiday is heavily themed around fire, and as a celebration of the bounty of the summer months, it is closely tied to fertility.

On the other hand Rökkatru focuses primarily on the “darker” divine forces—as will be discussed in my next entry, the very etymology of the work Rökkatru stresses the darkness. Rökkatru looks toward the twilight and the nighttime. Litha doesn’t seem like a particularly great fit for Rökkatru—but that doesn’t mean we can’t celebrate it.

Taking place on the first day of summer and being a sun and fire festival, there are actually some deities that fit among the Rökkr or the jötnar who can be honored at this time.

Skoll and his brother Hati chase the sun and the moon through the skies, respectively. It is their snapping slavering jaws on the Sunna and Mani’s heels that keeps them driven at even pace throughout the sky. This holiday is a wonderful time to honor the often overlooked and forgotten wolves of the sky, Skoll and Hati, perhaps with a blót, with offerings of meat and golden mead, or other light-colored beverages that resemble the light of the celestial orbs these wolves chase. 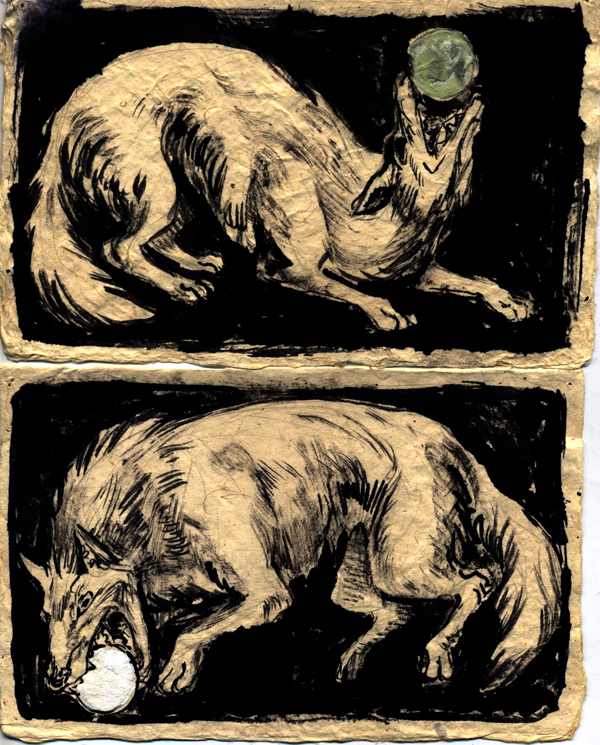 It is generally taken that Skoll chases Sunna and Hati chases the sun because this is how Snorri Struluson recounts the myth, but Grímnismál says this of the wolves:

“Skoll is the name of the wolf
Who follows the shining priest
Into the desolate forest,
And the other is Hati,
Hróðvitnir’s son,
Who chases the bright bride of the sky.”

Because of the gender associations of the words used in this passage (priest/goði being masculine, bride/brúðr being feminine) and because Mani is a masculine figure and Sunna a feminine figure, it is safe to assume that this passage implies the opposite of what Snorri had written. Regardless, both wolves are closely related, and given that the light of the moon is a reflection of the light of the sun, it seems a good idea to honor both wolves at the same time.

On the night of Litha, it would be appropriate to light fires to three other jötnar, who are little known and about whom little is known: Glöð (more commonly called “Glut” or “Glod,” and whose name means “glow”) Eisa (or Eysa) and Eimyrja (both meaning “embers”). In The Sagas of Thorstein, Viking’s Son, and Fridthjof the Bold Glod is named as the wife of King Haloge and Eisa and Einmyrja as their daughters, which is referred to by Rasmus B. Anderson in Viking Tales of the North. In Myths of the Norsemen from the Eddas and Sagas by Hélène Adeline Guerber they are recounted rather as Loki’s wife and daughters, respectively, something that some practitioners have reported in UPG as well. 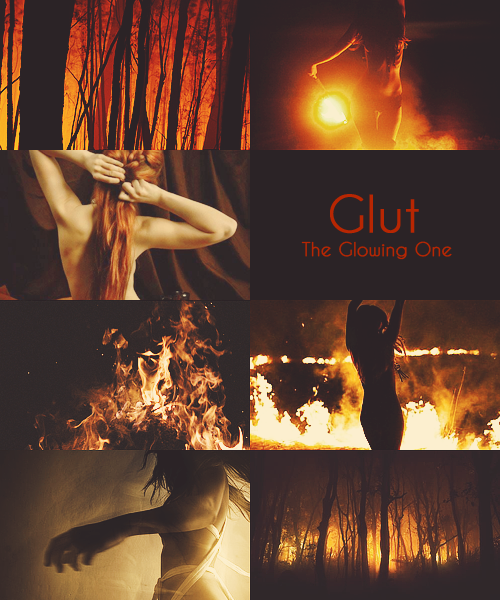 Nothing else is known about them, and what little is known is not known for sure. Whatever else may or may not be true about them, their names make it clear that they are closely associated with fire.

Because these jötunn women are specifically Maidens of Fire, and are potentially intimately linked with Loki (who holds an important role among the Rökkr) they are another set of perfect entities/deities to honor on this holiday of sun and fire. Fires can be lit in honor of Glod, Eisa, and Einmyrja, either on their own or as part of a blót.

These are just a couple of very basic ideas—the details are up to individuals to fill in as best fits their practices and preferences, but I recommend just doing whatever is most fun. This is a celebration, after all! I’m fond of having friends and loved ones over on the holidays, to collectively cook and share large meals, drink, do a couple simple loose-form ritual activities, and enjoy the company. It’s all up to you, though.

If you try any of these ideas out, feel free to share some of your experiences and thoughts, or any specific rituals you may have done—I for one would be interested to see what others are doing! If you are Rökkatru and you decided to experiment with re-framing this holiday but took it in a different direction, I would be very eager to hear about your interpretations as well!