Now that we have established at least some of the core values of Rökkatru, it is time to turn to the politics of Rökkatru. Though it may not be immediately obvious why it is necessary to discuss the politics of a budding minority religion, given the sociopolitical environment Rökkatru was born into and has been growing into, and the degree to which politics and religion have become muddled and intertwined in America, it is not something to be glossed over. Given that Heathenry as a whole is plagued with white supremacy and other forms of bigotry, it seems especially important to establish the politics of this new branch of Heathenry.

Though Rökkatru is not a unified or organized religion by any means, and there is wide diversity in the views and opinions held by those who practice Rökkatru, there has been some movement in online communities to firmly establish Rökkatru as anti-bigotry. In particular, some Rökkatru communities online have declared themselves in open opposition to the Asatru Folk Assembly, a Heathen organization widely known for espousing white supremacist, transphobic, and homophobic rhetoric.

The desire to form a visibly inclusive, anti-bigotry Heathenry has been voiced commonly enough within Rökkatru communities online that it seems safe to say that this is the most commonly shared sociopolitical outlook of Rökkatru. Considering that the values of Rökkatru include such values as diversity, acceptance, and community, and that the Rökkr themselves often represent the strength of nature’s diversity, it does follow that Rökkatru’s politics would be inclusive.

Furthermore, alongside the Lokean community, it is Rökkatru which boasts the highest degree of diversity among its ranks, in particular with regards to gender identity and sexual orientation. As the Rökkr are associated with shape shifting, in particular Loki who is known to shape shift not only into other animal forms but also into different genders, many Rökkatru see representations of their own fluidity in gender and sexuality reflected in their gods. Nothing within Rökkatru is strictly binary or easily confined to a box, which permits its followers a level of self-acceptance many were unable to find in other spiritual paths that adhere more closely to traditional, hetero- and cisnormative binaries.

In part because of the strength in diversity that the gods themselves represent, as well as the fact that many who might call themselves “misfits” have found spiritual home within Rökkatru, it is a path which has grown in the direction of inclusion and acceptance. Though within the ranks of adherents the most prominent form of diversity is in gender and sexuality, inclusivity and acceptance are extended to all those who fall outside of mainstream society’s hegemony. As a result, Rökkatru has not only been developing as a religious movement which values acceptance, it has been increasingly priding itself on being an anti-bigotry spiritual movement. 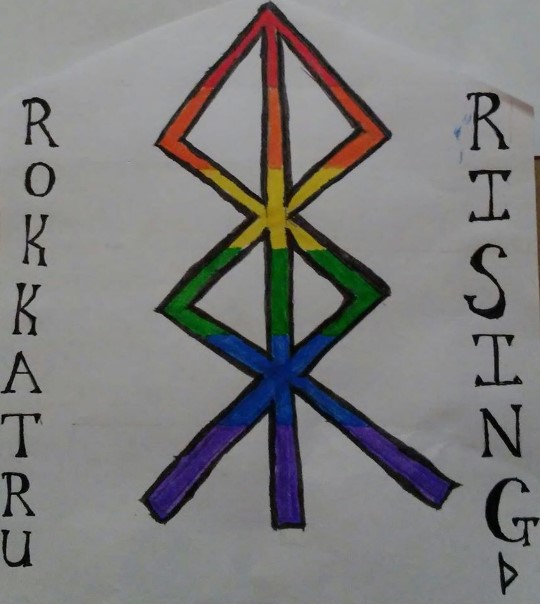 Not only is Rökkatru anti-bigotry, it also deeply values environmentalism. Again we see this in the values of Rökkatru, especially in those represented by Jord and Gerd. Caring for nature, especially in the age of climate change, is a key element of Rökkatru sociopolitical identity, and not just because of what Jord and Gerd represent. All of the Rökkatru deities are generally considered to be closely associated with nature. Some may have direct and explicit connections to natural forces, such as Surt (wildfires or volcanoes) or Aegir and Ran (the ocean). Others seem to mirror more vague natural energies, such as Hela (death), Fenrir (destruction), or even Angrboda (who is closely associated with wolves and generally associated with wild things).

With a couple of deities that specifically highlight the importance of caring for and working closely with nature and the earth, as well as how interwoven the Rökkr are with natural forces as a whole, it is clear that this is a path which reveres the natural world. Because of this, environmentalism has become a core element of Rökkatru political values. It is not unheard of, in fact, for people to make donations to environmentalist nonprofits in the name of a particular deity as a way of making an offering to that deity. For example, some people might donate to organizations that are dedicated to cleaning our oceans in the name of Jörmungandr (who is known in the lore to occupy the seas surrounding Midgard) whereas others have donated to wolf sanctuaries or other organizations that protect wolves in Fenrir’s name.

In an increasingly polarized sociopolitical climate, and staring down climate change and rising fascism along with an increase in visible violence towards marginalized communities, all of these political values boil down to a deep value of activism. Rökkatru as a whole does not seem to look well on inaction in the face of injustice, though there is an understanding of the limited abilities of some members of this immensely diverse group (limitations in time and finances, in physical, emotional, or intellectual ability, etc).

Activism in the name of Rökkatru spiritual practice can take many forms. We’ve already discussed the concept of donating to relevant nonprofits in the name of a god/dess as a form of offering. I have extensive experience volunteering with disadvantaged and marginalized youth in part as a form of devotional service to Sigyn, which you can read more about here. Those who are able have in the past shown up at counter-protests to represent this inclusive Heathenry in the face of white supremacist and Neo-Nazi appropriation of sacred symbols as rallies. Some have even shown up as part of the black bloc or with Antifa protesters to disrupt rallies of bigotry.

Ultimately, Rökkatru is made up of individuals who all hold different values and political views. Not all of these views are necessarily complimentary, and not all Rökkatru practitioners would even consider themselves political. The most commonly represented political views within Rökkatru communities, however, have repeatedly proven to prioritize acceptable and inclusion, environmental care and well-being, and active action on these fronts.

P.S. If you enjoyed this you might enjoy Is It Any Wonder, a narrative piece I wrote for Gods & Radicals that imagines what Rökkr deities might look and act like living in the modern world.